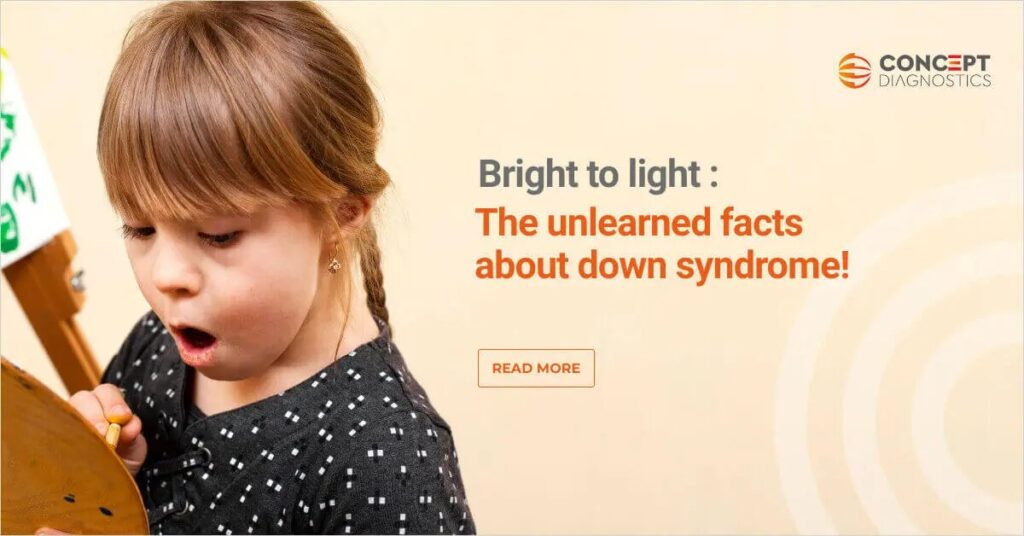 Bright to Light: The Unlearned Facts about Down syndrome!

Basically, Down syndrome is a medical condition in a person who has an extra chromosome. Chromosomes carry the genes in the body. They regulate the formation of the baby’s body and also its functioning during pregnancy and post birth as it grows.

Normally, a baby is born with 23 pairs of chromosomes. Whereas, a baby with Down syndrome has 21 extra pairs of full or partial copies of chromosomes. There is a medical term for extra chromosomes i.e. ‘Trisomy’. The additional genetics can lead to mental, developmental and physical challenges to the baby.

When juxtaposed with the IQ of healthy children, they have a mild to moderate range of IQ. Moreover, their speech is pretty slower than a normal child. They face challenges in thinking, reasoning and understanding.

There are some common features in babies with Down syndrome embraces followings,

What causes Down syndrome?

Down syndrome is caused by an extra pair of 21 chromosomes which lead to physical and intellectual challenges in the body. However, the exact cause of Down syndrome is still not known including its different roles.

In order to confirm the results, you can have two tests, that are, screening test and diagnostic tests. A screening test will help you to know the chances of risk of having Down syndrome during pregnancy. This test is pretty safe for mother and baby. Another is a diagnostic test, which detects whether a baby will have Down syndrome or not. It includes various tests such as Chorionic virus sampling, amniocentesis, Percutaneous umbilical blood sampling. However, there is no such test which can precisely and certainly predict.

It is the fact that each child with Down syndrome has different abilities and talents. But still, if you have a baby with Down syndrome, you may feel guilt and fear at first as there is no certain treatment to treat this long life condition but yes! Physical and intellectual abilities can be improved by offering services at an early stage. Therapy sessions such as speech, physical and occupational therapy can encourage and boost the abilities of the child. They need special attention from their parents, even in school.

“No matter what! Some flaws are carried away by the unique and different power every person has bestowed with!”

#DownSyndrome#HealhtcheckupDiagnosisFullBodyCheckup
Why is it important to have a hearing test?
Why Is Breast Cancer Becoming More Common?

Not sure which tests to take? Share your prescription with us and our team will call you to book tests for you.